Mind control is both a medical/psychological/social abomination and a practice of dark spirituality which creates “thought-form” attachments and/or other aberrations on or in an individual’s mind/body/soul – aberrations we might call demonic.

General mind control is practiced in “broadcast” form, convincing vast populations of numerous lies that make them subservient and asleep to their spiritual potential.

When people have no idea of the multidimensionality of our world and the “ocean of spirit” surrounding us, they may be easy prey for others with dark intentions.  And if their control occurred in childhood, they may have great trouble freeing themselves and living their naturally spiritual lives.

In recent history, Native American warriors danced the Sun Dance to end their genocide, Quakers worked to rescue Blacks from their slavery through the Underground Railroad, and Martin Luther King and his followers worked to end racial terror and other injustices.

While all those religious fights continue today, along with many other struggles around the world for justice, the fight for the healing of mind control subjects has just begun – and it is a spiritual battle. 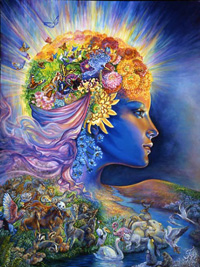 We believe there is hope for all of us, even the most brutally mind-controlled, if we awaken to the truths that we live in a multidimensional world, we have been created to exercise personal spiritual power, and we have spiritual enemies to resist.  These awarenesses can lead us eventually to reclaim fulfilling lives, our history, and our future.

Jean Eisenhower, the founding minister of this church, has been freeing herself spiritually from MKULTRA mind control subjection installed in her in childhood.  She employs shamanic practice (including Christ), along with psychotherapy, hypnotherapy, and more.